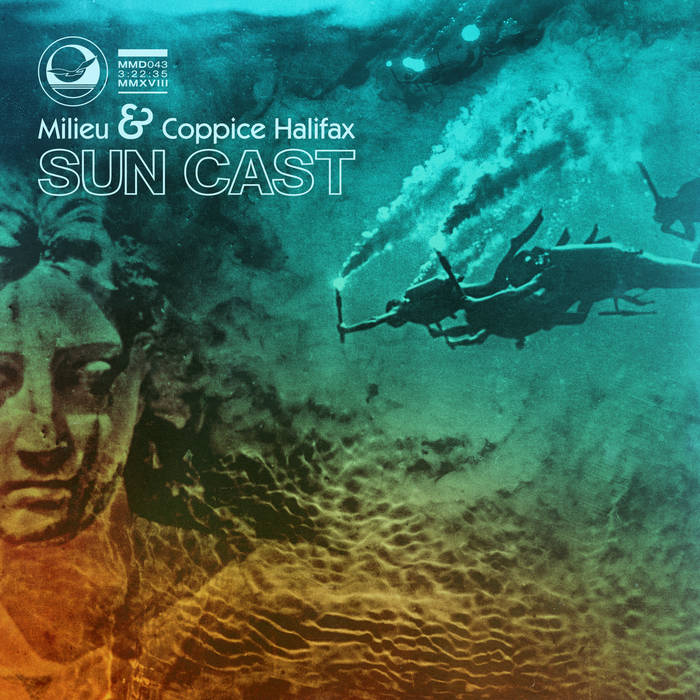 unbeatable-energy Your being influenced by Freescha - well that’s a no brainier (fantastic band and wish they were still going.) Great hear you are a fan of Fela too. I can hear the Tony Allen Afro beat in Cillag. Great album. You’re a hard grafter Mr Grainger I’d say.

BBND I just like how each track takes its time to develop itself in order to transport you in a different state of mind. Favorite track: Hurricane Blues.

SUN CAST is the result of eight years of recording work, which began life as a Coppice Halifax album in the Ocean Lion series. Over time, and through several changes in my creative and family life, I realized that I was actually writing a Milieu album. The two projects have always been grown from the same sun-kissed soil, and certain albums have blurred the lines drawn between them - Sun Cast is such a project, and possibly the most unique one to sit on that fence. (For those more inclined to watch/listen than to read, I have recorded a vlog video where I attempt to explain and contextualize this album: youtu.be/9UNHmTXcwhU )

Rather than think of my creative work as a compartmentalized, strictly separated set of colors/shapes/sounds/places, Sun Cast asks the listener to consider that Milieu, Coppice Halifax and all the other monikers I've used are themselves only vessels, each navigating a different part of a great ocean. This ocean's water has many elemental aspects about it - it might meet smiling faces and warm sands in a blue-skied tropical paradise, when Milieu is navigating. Or it could end up beached on a distant, isolated island, covered in mountains, valleys and hairy green forests, when Coppice Halifax takes the helm. Further still, Vhom inhabits a cold abyss of Lovecraftian black noise, further down than the Mariana Trench...and the plaintive strummed guitars on Brian Grainger albums are themselves looking out longingly at the waves, held fast inland by the confines of youth and memory. All of the other facets and iterations of my artistic subconscious exist in this space as well, be they distant blinking stars, the drunken laughter of best friends or a haunted swamp backyard behind a small house in the country.

And so, it is with this understanding that I ask you to consider Sun Cast as a rare opportunity to explore these alchemical soundwaves from two vantage points, instead of one. Like my obsession with Monet's paintings of the Rouen Cathedral - the same subject in the same space, transfigured by time and light every single day, and set into a frame by the same hands. Sun Cast is musical superposition - it is the new Milieu album, and it is also the new Coppice Halifax album. And when you listen to it, you will understand why it is this way - I didn't set out to do this out of indecision, or a lack of better editorial ability, and I couldn't convey the same sensation of depth and interconnection with my ideas if the Milieu tracks were separated from the CH tracks. The CH material on Sun Cast is not "remixes" or "versions", it is not bonus content or outtakes. Sun Cast is a straight line through a map that itself shifts from Milieu to CH and back to Milieu again for the duration of its trip.

All this text, and I haven't even discussed the music itself! I think many of you reading this far already probably know what to expect from something like this, but for those that do not - it is melodic electronic music, applied with cassette warmth, mutant jazz/funk break sampling, detuned synthesizers and a host of head-nodding drum machines. It is like tropical and humid sad synth-pop, blended with aspects of hip hop, shoegaze bands and psychedelic Impressionism, played in its own time, without trying to make itself palatable for radio or mainstream appeal. And yet, I feel that it is the most emotive music I've laid to tape in years, which could be owed to the time spent on it, or having become a father during the creation/gestation of the album. It is also built brick-by-brick out of many of my biggest influences, such as The B-52's, Freescha, GAS, Fela Kuti and all kinds of disparate sources of inspiration, such as a lake, an electric plant, an overgrown backyard, a bedroom with an open window, the backseat of a smoke-filled car, an old paperback...

In short, if you like Milieu albums like Swaying Palms or New Drugs, or you like Coppice Halifax albums like Ocean Lion or High Hawaiian Fog, then Sun Cast will really take you places. I hope you let it do what it has been designed to do, and if I'm right about that, we'll stroll on the sand, where the air and the land meet forever.

W/P by Brian Grainger. Recorded at the 114RKD, Botany Bay and White Pillar Workshop studios in South Carolina and Ohio, from 2010-2018. Mastered by The Analog Botanist. Text by ABM&D. Design and layout by Eric Adrian Lee. This is Milieu Music number MMD043.

Many humble thanks to the subscribers of the Deep Earth series. Without them, this music might not exist, and if it did, you might not be able to hear it. Support deep electronic mining initiatives today: malfokusita.bandcamp.com

Bandcamp Daily  your guide to the world of Bandcamp

outré black metal, with a Victory Over the Sun interview and music from Liturgy and Jute Gyte.